There are several ways in which opening balances can be brought into or edited in Reportance. This allows full flexibility if data manipulation is required, or if you are wanting to roll over opening balances from other files.

Directly imported from the client file

The easiest way to bring in opening balances is to simply use the opening balance journal that is imported when you connect directly to the client's file. This method works best if you know that the file is clean and contains the correct data. 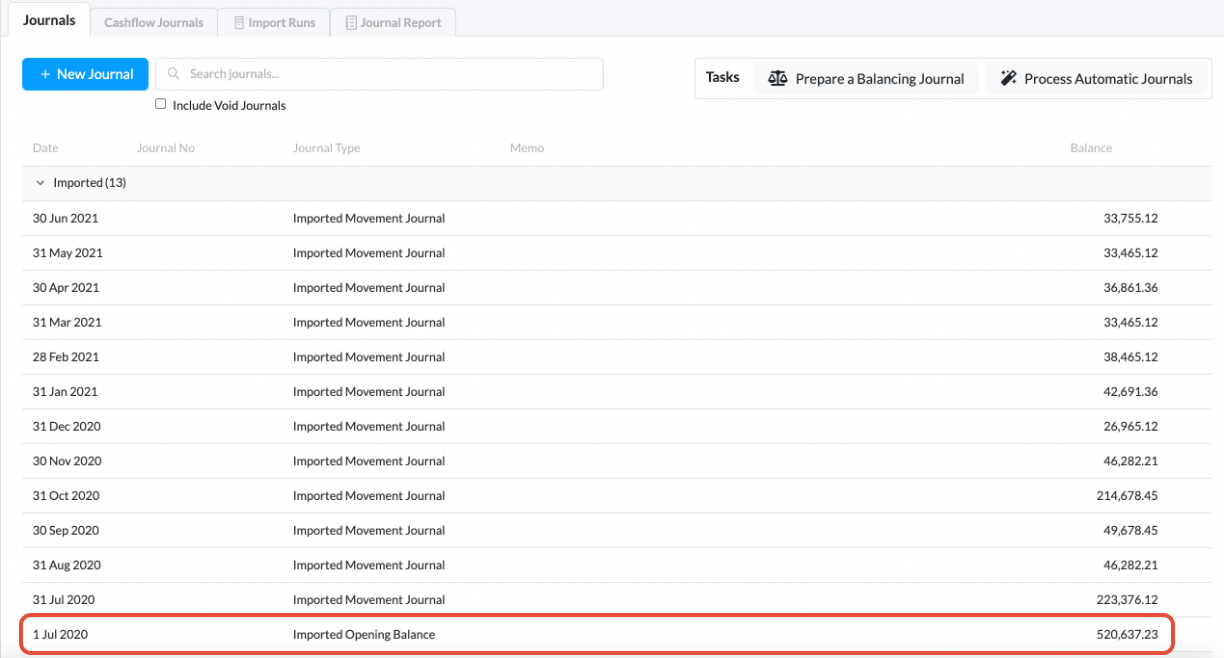 Generally, when using the Excel add-in to import data, a whole trial balance is imported to create a new dataset. However, it is also possible to use this function to create just an opening balance journal. To do this, first prepare your data using the three to six column method as normal (for more information on how to use the Excel add-in to import data see the knowledge article: Excel Data Import). Then click the Import Data button in the add-in, select the relevant dataset and hit Prepare Journal.

When the journal dialogue appears you will need to change the Journal Type from 'Journal' (the default) to 'Imported Opening Balance' using the dropdown menu. You will get a notification that the import will override any existing import journal for the same period. This ensures that there are no double ups when importing several times or from multiples sources.

Roll over from a previous dataset

If you are aware that the client's prior year closing balances in their file are incorrect, you can choose to use a prior year's dataset when creating the current year dataset. To do this, select the Roll over opening balances checkbox when adding a new dataset. This will bring up an Opening Balance Dataset dropdown to select the relevant dataset to use. From here you are also able to refresh the opening balances if any changes occur in the selected dataset. 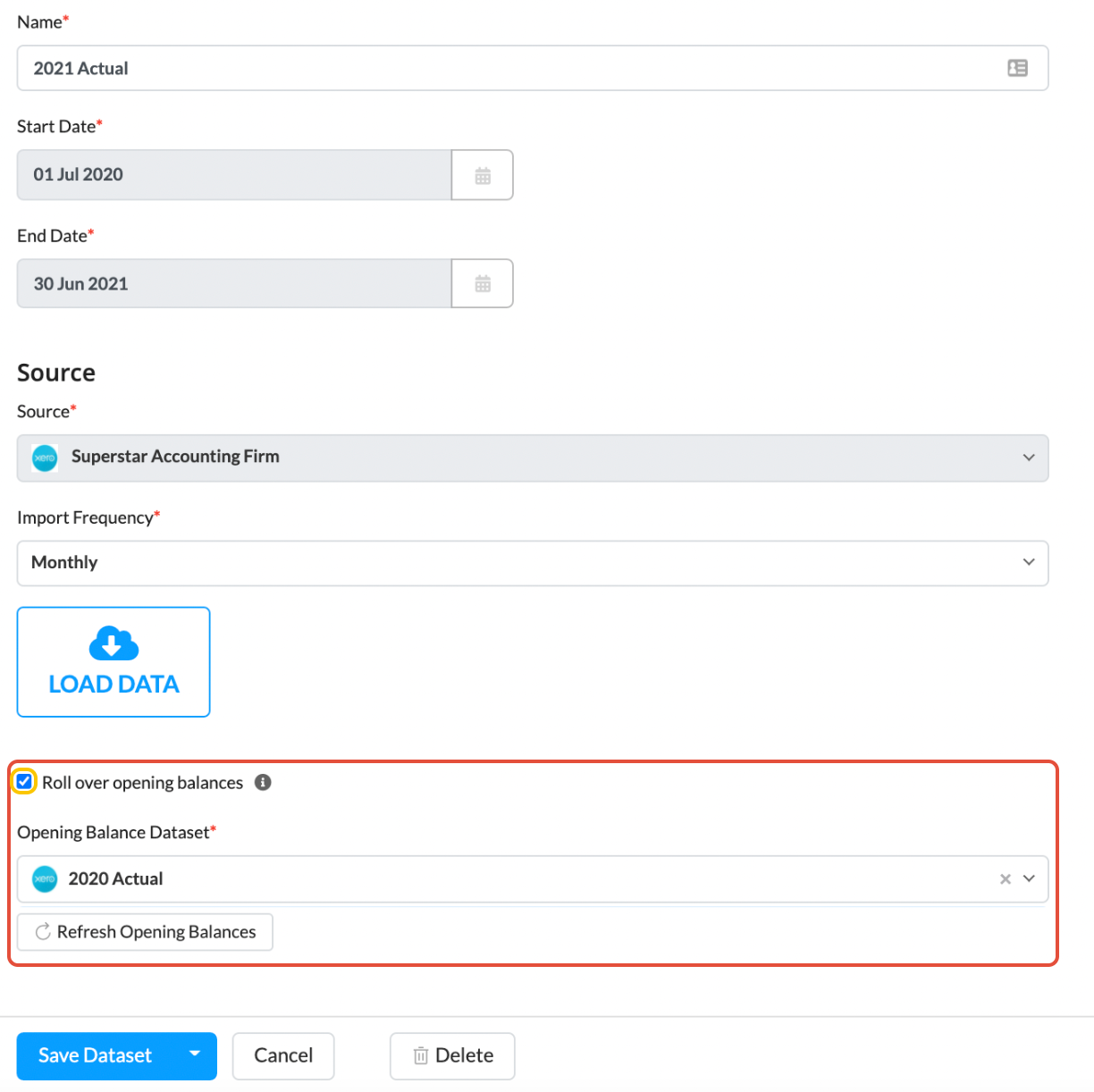 In this case, instead of seeing the opening balances as an imported journal, they will appear as a separate journal marked not for export, with the amounts coming from the closing balances of the dataset chosen rather than from the client's file. 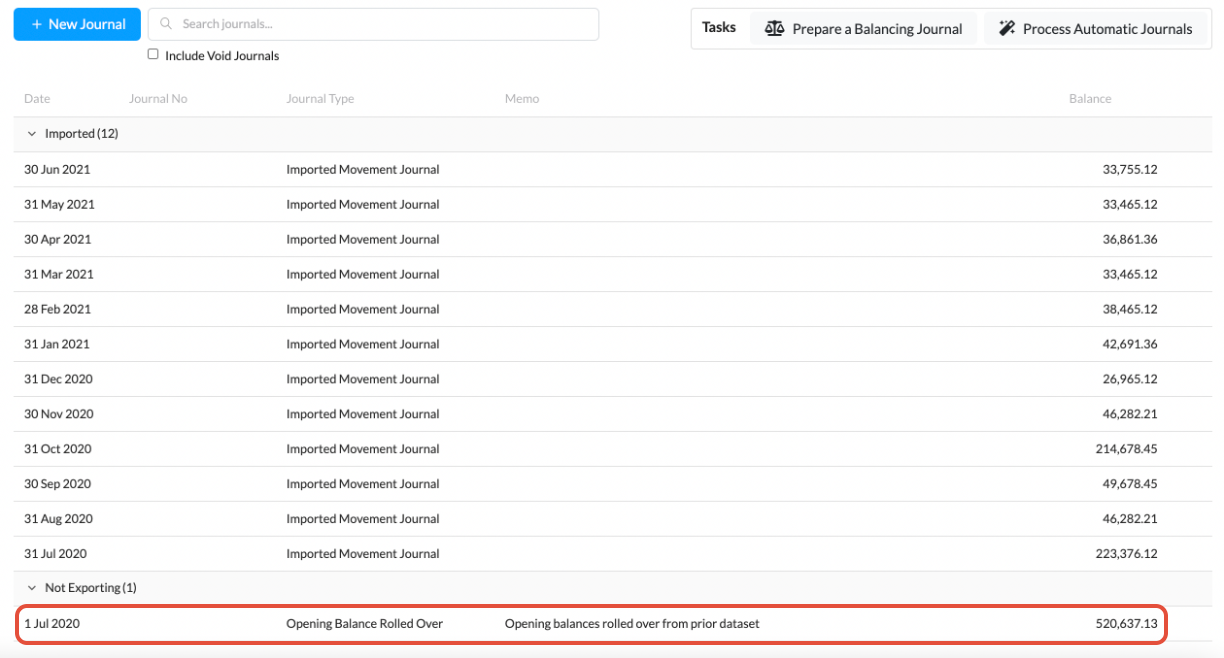 Using the prior year's dataset with 'opening balance accounts'

As an added bonus, this method can also be used if you have tagged specific accounts as Opening Balance Accounts in the chart of accounts. This ensures that any account balances sitting under the same header, will be moved to those tagged accounts in subsequent years. This is particularly useful for beneficiary/partner accounts. 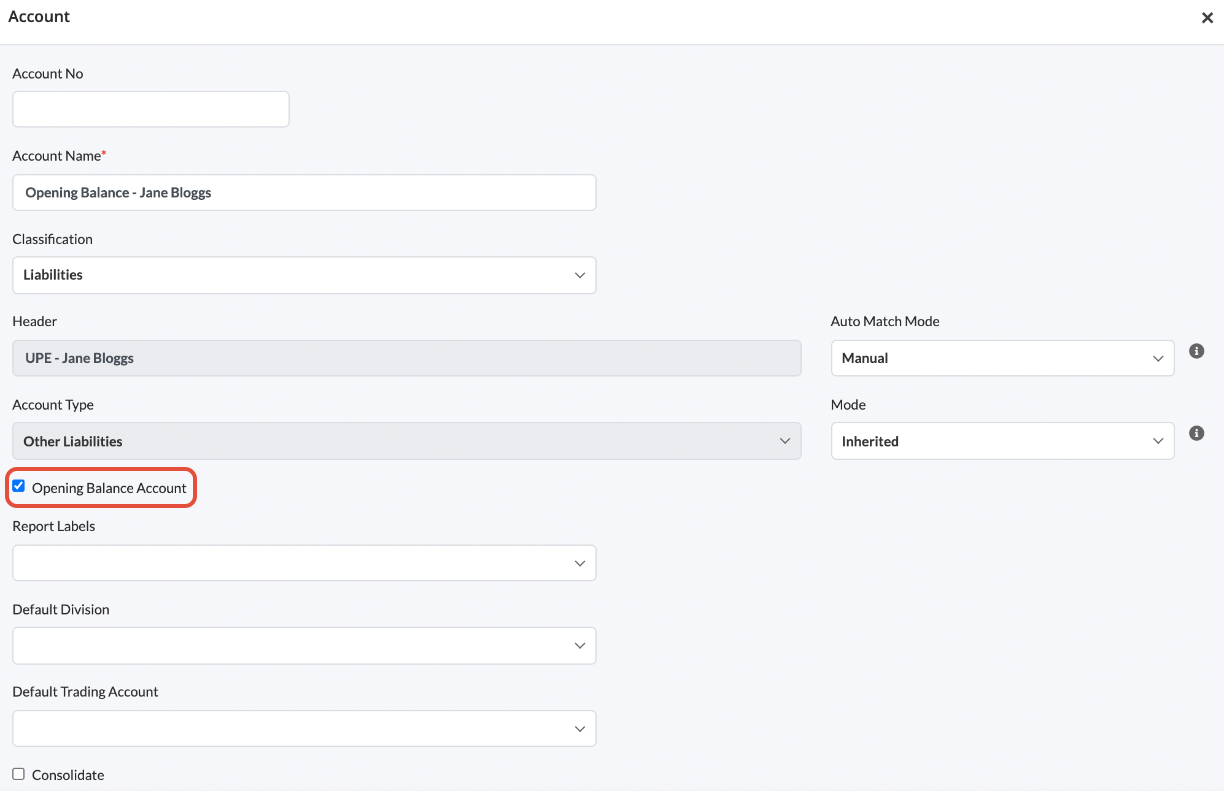 To ensure that the balances are rolled into the correct accounts in subsequent years, make sure that your accounts are set up correctly in the chart of accounts. The example below shows a typical set up for a beneficiary:

The account 'Opening Balance - Jane Bloggs' is tagged as an opening balance account. This tells Reportance to move the balances of the 'Drawings - Jane Bloggs' and 'Profit Distributions - Jane Bloggs' accounts to this account when creating next year's dataset.

An example is shown below of the resulting Balance Sheet after creating the new dataset:

A full opening balance journal can be prepared in Reportance using the journals screen. However, this method can also be used to make adjustments to already imported opening balances. This is particularly useful if you just need to make a small change to your client's data.

To create an adjustment journal, navigate to the Journals tab in the Datasets screen and create a new journal. In the Journal Type dropdown menu select 'Opening Balance Adjustment Journal'. Fill in and save your journal as normal.

Next article: Reporting - Creating a Report